Walk For Kids: Smeraldo To Make 66-Mile Trip To Bills Game On Foot 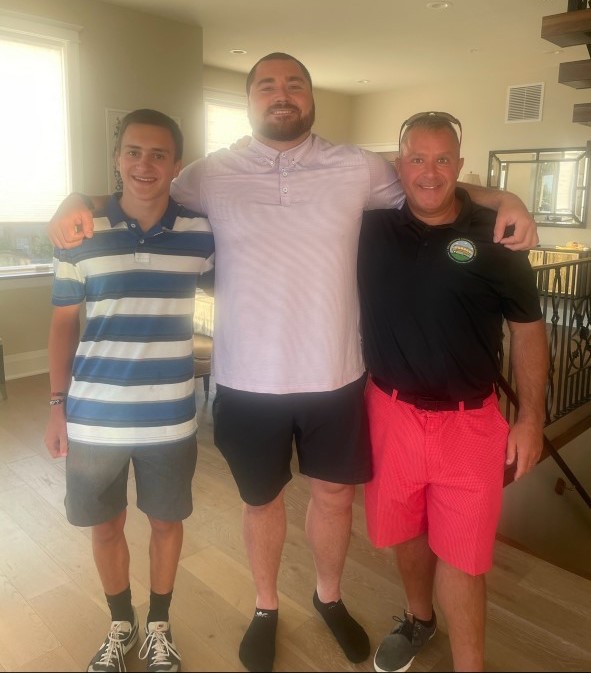 The Big Tree Inn in Orchard Park is a favorite destination for fans on game days during the NFL season.

It will be again on Sunday when the Buffalo Bills entertain the Minnesota Vikings. Patrick Smeraldo will be there — 10:30 a.m. sharp — because he’s got an interview scheduled with 97 Rock, a Buffalo radio station.

But he’s not a guest tasked with predicting the game’s outcome. Rather, the 54-year-old Jamestown resident is going to talk about Harrison Phillips, a former Bill and current Viking defensive tackle, and his foundation, Harrison’s Playmakers. The foundation is designed to offer kids with developmental delays and disabilities opportunities through sports camps and adventures.

Smeraldo will also talk about his weekend “constitutional” that will take him from the park & ride on Route 60 in Jamestown to Route 20 in Fredonia to the corner of Big Tree and Abbott roads in Orchard Park, which is only a couple of figurative Josh Allen deep throws from Highmark Stadium.

For those wondering, that’s a hike of 66 miles spread out over three days.

All in the name of a guy who wore jersey No. 99 with the Bills and now — after signing as an unrestricted free agent during the offseason — sports No. 97 with the Vikes.

Smeraldo is a physical education teacher in the Jamestown Public Schools by day, but his heart is with young people 24/7.

“I just think as adults we want better for our kids,” he said. “I think it’s our job as an adult to provide these opportunities and these resources.”

To practice what he preaches, Smeraldo walked around Chautauqua Lake last year to raise money and awareness for youngsters with special needs through a not-for-profit called Children’s Collaborative Solutions that he and his wife, Jill, formed a couple years ago. Proceeds were used to send the kids to summer camp.

Smeraldo is in hopes he can go 2-for-2 after this weekend.

And it all started when he commented in mid-June on a Facebook video posted by Melissa Moore that showed her son enjoying himself at Phillips’ special-needs camp at Highmark Stadium.

“I didn’t know who Harrison Phillips was,” Smeraldo admitted.

But what he did know is that there is a similar special-needs organization in Chautauqua County, formed by Rich Bianco, called Exceptional Stars Athletics. If there was any way that he — Smeraldo — could pay for those kids to attend Phillips’ camp, he was all ears.

Before he knew it, the idea began to gain traction.

Ultimately, Smeraldo was put in touch with Debbie Cavers, the director of Phillips Playmakers, who invited him to attend a barbecue in Buffalo in July. Accompanied by his son, Jacob, Smeraldo was blown away by the evening which allowed him to meet Phillips and foundation board members.

“I told him that I didn’t believe in duplication, so I’d rather help him spread (his foundation’s mission) in Chautauqua and Cattaraugus counties,” Smeraldo said. “I told him I’d help him get money. He hugged us both, shook our hands and then he teased me (by saying), ‘Don’t you want to get a picture?’ We took a picture and off we went.”

A couple weeks after that Kodak moment, Branden Maggio of Jamestown suggested that the Smeraldo walk from Jamestown to Orchard Park to raise money, just as he’d done in 2021 with his tour around Chautauqua Lake. Coincidentally, it just so happened that Phillips would be playing at Highmark Stadium on Veteran’s Day weekend.

“I’ve looked at the weather for the last month and It’s going to be decent,” Smeraldo said, “but I’m short on daylight.”

But not on support.

Danielle Stone of Jamestown posted an image to Facebook on Monday morning.

According to one of her Facebook posts from October, Danielle and her husband, Matt, have done foster care backpacks so “no child in the system would ever have to live out of a trash bag.”

Danielle and Matt, who adopted two boys and two girls three years ago, discovered that through the support of many agencies and programs, the need for backpacks was not as significant.

“But we saw an opportunity to provide something just as special … a birthday,” she wrote.

“Until you’re touched by foster care or adoption, one doesn’t think about whether those children have a typical ‘birthday’ while in care,” Danielle wrote. “Unfortunately, their birthdays at times go forgotten, go unnoticed, or aren’t in the financial means for the month.

“And so … when (Smeraldo) and I met to talk about how he could support us this year, the idea of our birthday boxes came to life,” Danielle wrote. “Joining court-appointed special advocate (CASA) and New Directions was an added bonus. … Kids right here in Chautauqua (County) are going to have birthday parties free to their foster parents. It might not be life changing to you or I, but it’s so important to these kids, to remind them how their special day is just as important as every other child’s, that we care, that they aren’t forgotten, that we’re celebrating them.

“We can’t do this without you,” Danielle’s Facebook post concluded, “and we’re so grateful to live in such a generous community.”

Upon meeting Phillips at the Buffalo barbecue over the summer, Smeraldo learned that they deal with life’s stresses in much the same way.

Phillips, Smeraldo said, finds a release by visiting organizations and agencies that work with children.

“That’s me to a T,” Smeraldo added. “When I walk into Fletcher School, nothing else matters. Everything goes away.”

Might we suggest the young people he serves every day give him an extra bounce in his step, something he’ll need beginning Friday.

“This is meant to be,” Smeraldo said.

We use cookies on our website to give you the most relevant experience by remembering your preferences and repeat visits. By clicking “Accept All”, you consent to the use of ALL the cookies. However, you may visit "Cookie Settings" to provide a controlled consent.
Cookie SettingsAccept All
Manage consent

This website uses cookies to improve your experience while you navigate through the website. Out of these, the cookies that are categorized as necessary are stored on your browser as they are essential for the working of basic functionalities of the website. We also use third-party cookies that help us analyze and understand how you use this website. These cookies will be stored in your browser only with your consent. You also have the option to opt-out of these cookies. But opting out of some of these cookies may affect your browsing experience.
Necessary Always Enabled
Necessary cookies are absolutely essential for the website to function properly. These cookies ensure basic functionalities and security features of the website, anonymously.
Functional
Functional cookies help to perform certain functionalities like sharing the content of the website on social media platforms, collect feedbacks, and other third-party features.
Performance
Performance cookies are used to understand and analyze the key performance indexes of the website which helps in delivering a better user experience for the visitors.
Analytics
Analytical cookies are used to understand how visitors interact with the website. These cookies help provide information on metrics the number of visitors, bounce rate, traffic source, etc.
Advertisement
Advertisement cookies are used to provide visitors with relevant ads and marketing campaigns. These cookies track visitors across websites and collect information to provide customized ads.
Others
Other uncategorized cookies are those that are being analyzed and have not been classified into a category as yet.
SAVE & ACCEPT